so far today I've packed up a few boxes, had a nap, gotten netflix (haven't actually watched anything yet), re-read a book and watched an iron chef america marathon for three hours.

I'm paying close attention to my heart rate, and making sure to keep my feet up mostly.. but this is hard! I'm not good at sitting around anymore. ten years ago, I was great at it! >.<

hubby is out tonight, but he's promised to pick me up a series of books that I want to read.. so that should take me a few days to read through hopefully.

I don't want to only hang out at my sisters, especially not so early.. she'll get sick of me pretty quick.
Posted by Pyra at 2:57 PM 2 comments:

why are doctors so cruel!?

so I had to go for a second Glucose Tolerance Test.. this time with a syrup..ier...syrup stuff. It was gross, and actually made me a bit dizzy to drink it.

Not only did I have to drink it, but I had to fast for 12 hours first.

Take a pregnant lady, who is sick *all* the time, and tell her not to eat anything for 12 hours. Then force her to drink a bottle of syrup.. all in five minutes. Then tell her that she can't eat for three more hours, and make her sit around so you can take her blood every hour.

Is it just me, or does that sound a bit sadistic?!

On a happier note, My stroller came! 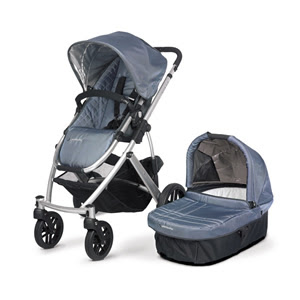 This stroller is awesome!

as a perk of my chosen profession, I get to try out hundreds of strollers, and this is by far my absolute favourite. Unfortunately, it was also BY FAR the most expensive, running about $1000.00 US.

I had given up hope that I would ever have my dream stroller. and then!!! I decided to search "uppa baby vista" on google, and kijiji/craigs list, and then finally amazon.com.. where I found one for $499.00! Still expensive I know, but the way I see it, it's an investment. There are attachments for one more seat, and a piggy back board so three children could ride on it, and it fixes all of the issues that I have with strollers. the most important is the fact that I have a strangely long stride and tend to kick the underside of every stroller in the world. This one is perfect for me! It has a raised, curved bar so it's impossible for me to kick unless I do the can-can while I push it.. I tried it, while fun, it wasn't very efficient for getting around.

also, it comes standard with a bassinet, and rain/bug/sun shields. It has a huge undertote thinger so my purse could stick in there easily. I *heart* it.

It came today, so I put it together, and although I was told that I am "not to take the cat for a walk", he jumped in it of his own free will(!) and we strolled around the apartment until he started hissing and took off.

Now, I just need to find somewhere that sells the adapter for a graco car seat. I know they exist, but am having trouble finding somewhere to actually go buy it, I guess I'll have to order it online.

So a few weeks ago I did a glucose tolerance test. Standard for all pregnant women nowadays I've been told... Mine came back with a higher glucose level than the doctors would like.. so I need to go back. I need to fast for 12 hours (that's a bit cruel to do to a pregnant lady don't you think?) and get blood taken as a baseline, and then drink sugary crap even worse than last time.. sit around for a few hours, and then get more blood taken.. and this time, if it's still high, then I've got gestational diabetes.

I was also told that stress can increase the risks of all sorts of things during pregnancy, and the doctor that comes in from the hospital for all of my appointments, suggested that I go on my maternity leave even earlier than I had anticipated.

I'm just incredibly scared.. I don't want to be diabetic... during, or after pregnancy. I feel like my body just isn't cut out for this. the world is punishing me for wanting a baby :(
Posted by Pyra at 5:05 PM 2 comments:

Morning sickness, my stupid apartment, my job.. a mash up of things I hate.

It has returned with a vengeance.
Everyone said that morning sickness would go away at about 12 weeks... 12 weeks came and went. The past month of so has been sort of ok, much better than before that's for sure..nausea and a queasy feeling constantly, but no actual vomit. I was starting to think it was going away entirely!

Until two days ago, when I collapsed in front of the toilet in a puddle of sweat and exhausted and my ribs hurt from the pain of the heaving. I'm so tired of this, and I've forgotten what it's like to *not* feel sick. Will it really magically go away after the baby comes? I find that hard to believe... maybe I"ll never be able to eat onions again.

so far in the past three days, I have had 2 extreme vomitty sessions, and 8 smaller ones where I just throw up whatever is in my system and be on my way. My ribs and abs hurt, I have a horrible headache, I have burst blood vessels all over my face and neck that make me look diseased. I need this to be over.. I don't know how much more I can take. :(

Lately, I feel so restless too. That nesting instinct they talk about is powerful! I want to clean, and set everything up for the baby.. but I don't want to nest here! I want to nest in our new house.. where there is a whole room for the baby, not just a two foot gap between the end of the bed and the closet.. Where there is a playroom (I do realize that a two week old baby will not be doing much playing and wouldn't have much need for an entire playroom.. but still)

I want to just get everything all set up and I can't, so I feel restless, and anxious.. I want to open my blinds without feeling like a zoo animal. when I open my blinds, without fail, there is a stupid guy on his balcony across from our window... He's ALWAYS in a robe, smoking and drinking something. Doesn't matter what time of day, he's always out there, and he's never dressed. There was a woman with him one time, all made up and dressed to go clubbing... and he was just smoking in his robe. I think she was unimpressed, because I haven't seen her since.

Being here makes me want to cry, and the fact that EVERYTHING hurts and so I can't comfortably go for a walk, or even to sit in the park across the street.. makes everything so much worse... 62 days til the house... just 62 days.. *sigh*

I've been slacking at work. I'm tired of people feeling so bloody entitled, and I never realized just how much I let people get away with until my replacement came in, with a fresh set of eyes to point out all the stuff that people are half-assing.. or just not doing altogether. I'm glad I'm out of there soon, because I just can't take it. I ask people to do SELF evaluations, and the response from at least 50% of my staff was "do we get overtime for this??". Go fuck yourselves.

on a happier note, the baby is very active, and kicks me constantly.. but now it's not as painful as it was in the beginning.. I think the elbows have gotten some padding or something, because it doesn't feel so much like someone is stabbing me from the inside.

I'm determined not to be mad at this kid.. I'm so sick all the time, and so uncomfortable that I feel like when I finally meet it, I'm just gonna be so pissed at it.. supposedly that's normal, but I can't help feeling like I'm already a shitty mum..
Posted by Pyra at 2:47 PM 1 comment:

I have to meet the woman that will be replacing me when I go on my maternity leave. I was hoping that it would be my favourite coworker.. but alas.. it wasn't meant to be. My head office chose someone external, and so I need to train her fully.. even though I've already mostly trained my coworker...

hopefully she's nice.. and won't make my staff's lives hell, because now they're pretty panicked. Some, I don't really care about.. because they don't care about anyone but themselves, but there are some staff that are amazing, and really caring.. so they deserve some slack.

I guess I shouldn't expect the worst.. she'll probably be lovely, and I have three weeks to mould her to my liking :D
Posted by Pyra at 6:24 PM No comments:

it's all "firmed up". we own the house, and we get the keys on December 19th. six days before christmas!

We get to have christmas in our new home :)
Our tradition every year, has been to buy a tree ornament that has something to do with a big event that happened that year.

Our first christmas together we got this one 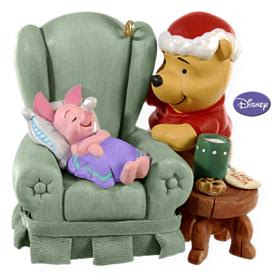 .
Our second christmas, we had just gotten married, and we bought an "anniversary" ornament, that you can change the number in to show which anniversary you're celebrating.

This year, with a baby on the way, we bought this one 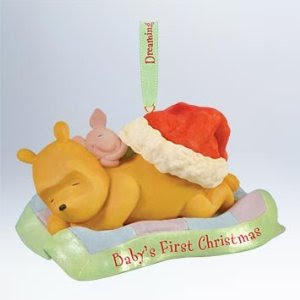 I'm thinking maybe we should buy another one because we just bought a house. That's two maaaaaaajor events in one year! Maybe we'll save that for next year, when the house is really our home, this year.. we'll just have moved in, and it won't be all that homey yet.

Now if only the hubby's family would stop fighting so we could share our good news with them too...
Posted by Pyra at 9:16 PM No comments:

Pyra
Ontario, Canada
I was a single gamer girl.. now, I'm a married mother of a bouncing baby boy with a whole new outlook on life.